It is fall here in New York, and the delicious, fresh-off-the-tree apples are to be had in abundance. I don’t want any to go to waste, so it was apple pie time! Of course, I had to try baking some in cupcake tins.

Baking what I blog, I followed my instructions for making and freezing apple pie filling. I used 7 apples, which were 2 1/2 pounds once peeled and cut. Juice from a Limoneira lemon along with cinnamon and nutmeg flavored the filling. I needed only about 1/3 of it to make 12 mini apple pies, so I froze the rest for a future pie.

I cut the apples in chunks rather than slices to better fit the muffin tins, and I perhaps could have cut smaller, though I did not want it to turn into applesauce. I could only get about 4 pieces of apple in each. It was enough, though I felt there were some gaps in a few pies (gasp!). I’ve had good results with Simply Recipes‘ all-butter crust recipe, though I use a stand mixer with a flat beater instead of a food processor.

My method: After mixing together the flour, sugar and salt, I stop the mixer to add the butter, tossing with a fork to coat before mixing on medium-low speed until it resembles coarse cornmeal. I then add ice water a tablespoon at a time until the dough starts to pulls together. I cut out 4-inch rounds to place in the bottom of greased muffin tins. After filling the cups, I cut pieces of pastry dough and wove a lattice with six strips for each. It took awhile, but the results were pretty cute! I could have gone larger for the bottom crusts, I didn’t have a rim to fold back over for a better edge. It worked out ok, I just tucked each strip under, trying to connect to dough below. To get in just a bit more deliciousness, I used Sonoma Syrup Co.‘s Sea Salt Caramel Syrup to add a finishing touch. I put the caramel in a squeeze bottle for more control and drizzled some over the uncooked pies before putting them into the oven. When researching caramel apple pie recipes, I’d read one that poured caramel over the lattice, which is all I did here. A taste of just the top crust was delightfully caramel, but overall I’d say that I did not use enough. If you try the same, you should really pour that stuff on!

It got messy in the oven, but once the pies had cooled somewhat and come out of the pans, I was delighted with the results. Thank you to Sonoma Syrup Co. for the caramel syrup. The company handcrafts its extracts, syrups, and bar mixers in small batches in Northern California with botanical ingredients. Learn more at www.sonomasyrup.com.

I dabbled in cake mix when I was younger. You know, teenagers like to experiment. But I learned my lesson and have been a “from scratch” girl since.

Why so tough on mixes? Typically, they are full of preservatives and down right baffling ingredients. I mean, do polyglycerol esters of fatty acids sound like something you want to consume? You can taste the “mixiness” of it. No, thanks. Foodstirs—founded in 2014 by Sarah Michelle Gellar (yes, of Buffy fame) and friends Galit Laibow and Gia Russo—offers what they call quick-from-scratch mixes. Each mix contains only 6-10 organic and GMO-free ingredients that can be traced to their source. Now, that’s a kind of mix I can get behind.

I decided to try out the exclusive Brooklyn Brownie Mix that recently debuted at Whole Foods in the neighborhood of Williamsburg. This mix makes a chocolate brownie with chocolate chips and salt flakes on top. (Someone thinks we Brooklynites are “salty,” eh?)

As promised, the instructions were simple and quick. I needed only 2 eggs, vegetable oil, and a little water to get going. I grabbed my whisk and batter bowl, and set to work. One change to the instructions, I made cupcake-sized brownies instead of spreading them in a 8″x8″ or 9″x9″ pan. That worked great and gave me reasonable single portions.

Of course, I immediately ate two.

They were delicious with none of that “mixiness” I so loathe. I look forward to trying out some of Foodstirs’ other offerings. (I have my eye on you, Chocolate Chippy Cookies.) Thank you to Foodstirs for providing mixes for me to sample.

I’m on Snapchat! Add me @cupcakesamelie.

Watermelon says summer to me. A last minute request for watermelon-flavored cupcakes meant I didn’t have much time to research or shop. Fresh watermelon seemed risky, and I could not find extract, so I used what I could find in a hurry.

Jelly Belly Watermelon Syrup–I bought my bottle at Michael’s—is meant for making snow cones and popsicles, but I gave it a try in my cake batter and frosting. I reduced it to make it more concentrated, but it gave only a faint flavor.

I would recommend using Pure Watermelon Extract for those wanting to bake better watermelon cupcakes than I produced! The cupcakes were still good, but they mostly just tasted like vanilla.

At least they looked pretty. I was making Minecraft cupcake toppers with gum paste (stay tuned for Minecraft Cupcakes, Round 2!), so I created some watermelons while I was at it.

The Jelly Belly Watermelon Syrup did make a kid-pleasing soda when added to seltzer (approved by a 7-year-old expert). I lived in Cobble Hill until recently and had noticed this bakery preparing for its opening before my move. The spot used to be Coco Roco, a Peruvian place whose roasted chicken with rice and beans is a favorite of mine (their Park Slope location is still open, go get some).

I stopped by recently and tried the Salted Caramel cupcake and a cappuccino. The cake was light, like angel food cake rather than a typical vanilla cupcake. It made me feel less guilty about the thick frosting (buttery, not too sweet) with a generous dollop of salty-sweet caramel.

With ample seating both indoors and out, Mia’s is perfect for a shopping break, a leisurely afternoon, or a dessert date. The bakery offers coffee, a wide array of sweets, and a few savory breakfast options. Mia’s Brooklyn is open until 11pm on weeknights, 1am on weekends.

Craving oranges like sunshine at the tail end of winter, I decided to go citrus for a karaoke birthday party. I can’t guarantee that these cupcakes will make you want to sing, but they might brighten your night! Since my grapefruit cupcakes didn’t quite hit the flavor strength I would have liked, I tried something different this time. Instead of using straight OJ, I cooked the juice, reducing it by about half before using it in the batter and frosting. 1/2 cup reduced to about 4 tablespoons will give you enough for this recipe. When I first tasted the frosting after mixing it, I did not think it tasted great. But after just a little while, the flavors melded…and it was really good. The orange cake was especially moist, too. These were some of my favorites of recent cupcake experiments!

With the vanilla, these have a bit of that Creamsicle/Dreamsicle creamy citrus taste. 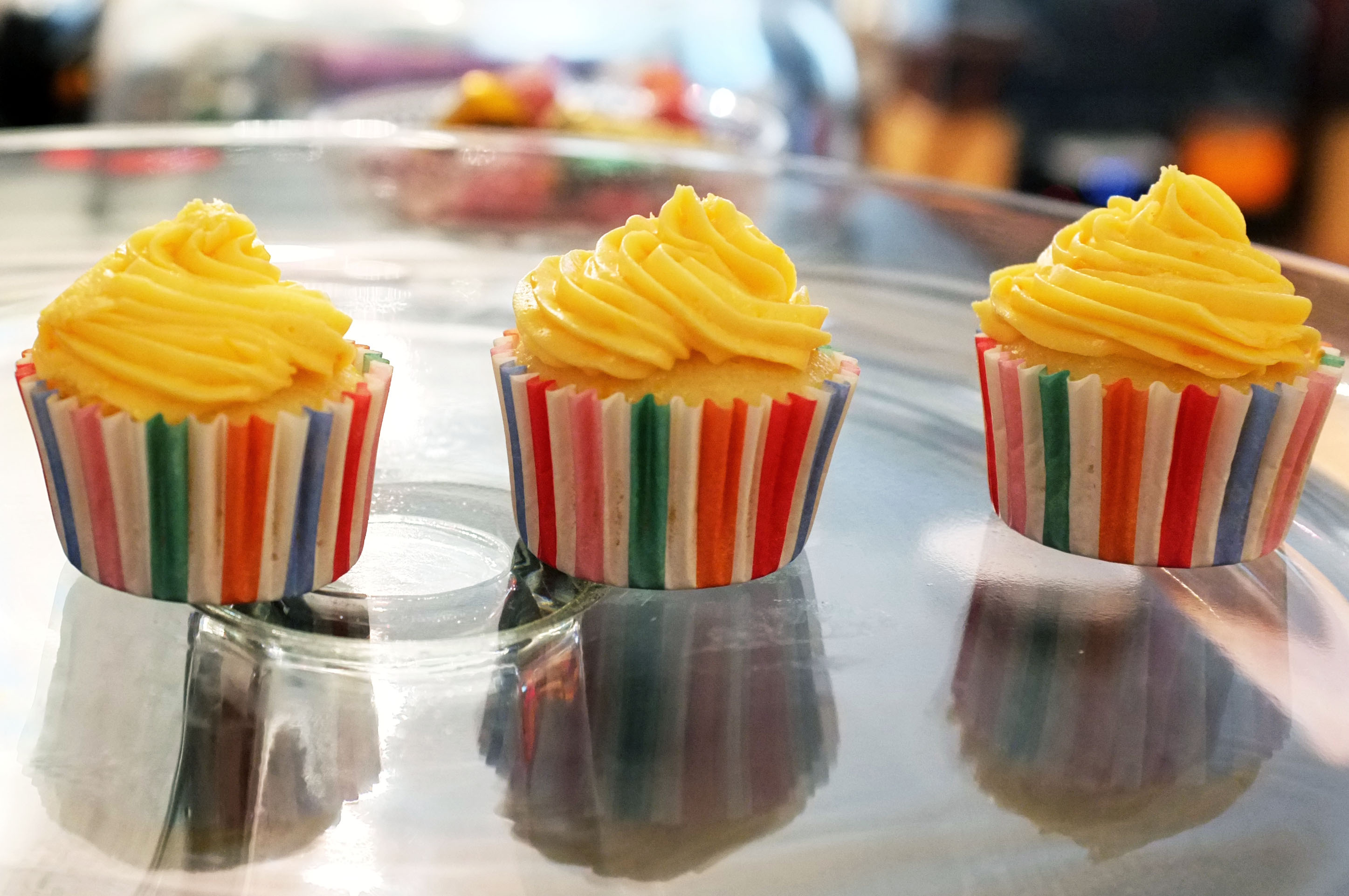 Cream the butter, cream cheese and sugar at medium speed, then reduce to low. Add the eggs one at a time, then add the orange juice and vanilla extract.

Sift together the flour, baking powder, and salt. Add the orange zest to the flour mixture. Incorporate the dry ingredients gradually into the wet ingredients, mixing until just combined.

Scoop batter into lined muffin tins (I use a size 50 ice cream scoop for minis). Bake 5-6 minutes, rotate, then bake another 5-6 minutes. Baking time may vary, so keep an eye on them!

Cool in pan for 5 minutes, then remove to racks to cool completely before frosting.

*Start with 1/2 cup fresh orange juice and simmer until reduced by half. This will give you enough to make these cupcakes and their frosting. (You could also probably use thawed concentrate.)