Perhaps cupcakes aren’t ideal for sand, sea, and sun, but friends and I had planned a day at the beach, and it was the perfect opportunity to create seashore-themed treats!

I started by baking a batch from one of my standby recipes, the Classic Chocolate Buttercream Cupcakes from Fergel Connolly‘s 500 Cupcakes. I like making them when I want a less intense chocolate, they use just a few tablespoons of cocoa in the batter. They were my first cupcakes to get rave reviews, and they are my default when I need a sure thing and/or just want to concentrate on decoration.

The real fun was making these into beach and ocean. I mixed up my regular Vanilla Buttercream Icing for them, putting cocoa in half the batch. I planned to color the rest blue for my faux water.

I pulled out my handy dandy box of food coloring, popped the top of the blue, and squeezed gently. Nothing. I squeezed harder. Nope. I ended up cutting the bottle open, scraping the coloring out with my finger and swirling it into the icing (yes, I’d washed my hands). There is still, several days later, a blue cast to that fingernail.

I grabbed a Wilton 1M tip, filled a pastry bag with the blue goo, and started piping without a real plan. I made squiggles, then peaks, starting to pipe more freely and aggressively.

“Choppy water!” both the friend who had joined me to decorate and I exclaimed in unison. 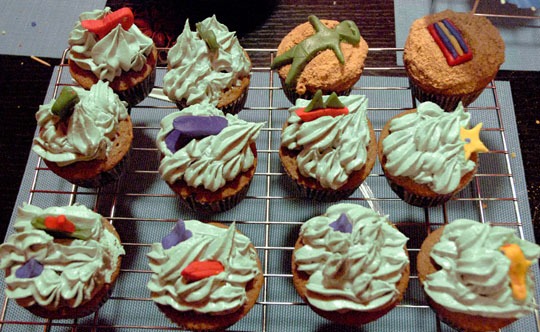 The fondant I had on hand, leftover from another project, was rock hard when we pulled it out of it the container I’d thought was airtight. Microwaving in 5-10 second bursts helped to a certain extent, but eventually we had to take more drastic measures, working soft butter into it. It was still a nightmare to work with. My friend made me throw out the excess, we won’t be working with that batch of fondant again! While I frosted the rest of the cupcakes with chocolate and made graham cracker “sand,” however, she did manage to make reasonably realistic starfish, beach balls, a towel, shark fins, and, randomly, a sunbathing alien. I arranged them as I saw fit, we added a few cocktail umbrellas, and called it a night. For amateurs, I think we did pretty darn well. It wasn’t a hot, hot day, but the sun’s warmth still did a number on the icing, melting my waves and making a mess of our decorations. (I feel a heat vs. icing experiment coming on… Stay tuned for a future post!)

Oddly, I think the taste was enhanced by the heat, especially for the chocolate-frosted cupcakes. The chocolate buttercream seeped into the chocolate cake almost to the point, in at least one case, of seeming as if I’d filled them with it.

On the cupcakes with the plain vanilla icing, however, it seemed to melt the butter from the icing into the cupcake, leaving plain sugar on top. It didn’t work as well as the chocolate, in my opinion, but it wasn’t a horrible occurrence. One friend suggested I melt butter on baked cupcakes, then ice them. I’m trying not to clog my friends’ arteries in one fell swoop, though!

All in all, they were a success, my sunbathing companions were pleased. We were even able trade one for a beer from a beach vendor.

“This is the best cupcake I’ve ever had,” he said. “I mean…” He looked around. “My sister isn’t here, is she? Really, this tastes amazing, better than any I’ve eaten before!” I think he was drooling a little.

My photographer—and fondant designer—for this post was Jennifer Pinkowski. Learn more about her and her work at www.jenpinkowski.com.

One thought on “Sweets by the Sea, Baking for the Beach”